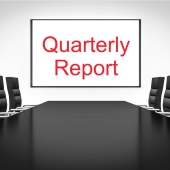 The second quarter was full of ups and downs for stocks as investors had plenty to worry about. Throughout the quarter, the trade war between the United States and China ebbed and flowed as news continuously changed from positive to negative. Employment was steady and the unemployment rate remained low, but wage growth was moderate at best. Manufacturing and industrial production hit a snag during the second quarter, as did business fixed investment.

April saw stocks post solid returns as each of the benchmark indexes listed here enjoyed gains of at least 2.5%. The yield on 10-year Treasuries increased by 10 basis points as prices fell. A solid start to corporate earnings season helped support stocks, as did low interest rates and weak consumer price pressures. The March labor report helped quell investors’ fears, as almost 200,000 new jobs were added. As to the major indexes listed here, the Nasdaq led the way, gaining over 4.7%, followed by the S&P 500, which closed the month up by almost 4.0%. The small caps of the Russell 2000 and the Global Dow each rose by nearly 3.3%. The Dow, while pulling up the rear, still gained over 2.5% by the end of April.

Unfortunately, the gains of April were lost in May as stocks fell sharply, closing out their worst month since last December. Encouraging rhetoric at the end of April that a trade deal could be reached between the United States and China was quickly replaced in early May with the imposition of new tariffs on U.S. imports from China. Retaliatory tariffs on U.S. exports entering China soon followed. The Nasdaq and Russell 2000 fell almost 8.0% in May, while the S&P 500, Dow, and Global Dow each dropped by more than 6.5%. Money moved from stocks to bonds, driving prices higher and yields lower. The yield on 10-year Treasuries sank 37 basis points to close May at 2.13%. Crude oil prices, which had exceeded $60 per barrel in April, plummeted by almost $10 per barrel by the end of May.

Stocks rebounded during the middle of June and soared by the end of the month. The tech-heavy Nasdaq led the monthly gains, reaching almost 7.5%, followed by the Dow, which also gained over 7.0% for the month. The Fed’s decision to hold interest rates helped drive investors to stocks. Still, investors sought long-term bonds, driving prices higher and yields lower.

Ultimately, stocks posted solid gains by the end of the second quarter. Each of the benchmark indexes listed here closed the quarter with gains, although not close to the double-digit returns earned at the end of the first quarter. Low inflation, the trade war between China and the United States, and news that the Fed is considering lowering interest rates helped quell investors’ concerns. The large caps of the S&P 500 led the way at the end of the second quarter, gaining 3.79%, followed closely by the tech stocks of the Nasdaq, the Dow, the Global Dow, and the small caps of the Russell 2000, which eked out a quarterly gain of 1.74%. By the close of trading on June 28, the price of crude oil (WTI) was $58.16 per barrel, up from the May 31 price of $53.33 per barrel. The national average retail regular gasoline price was $2.654 per gallon on June 24, down from the May 27 selling price of $2.822 and $0.179 lower than a year ago. The price of gold soared by the end of June, rising to $1,413.30 by close of business on the 28th, up from $1,310.30 at the end of May.

The third quarter of the year will likely bring much of the same tumult as was found in the second quarter. Employment should remain strong, although wage growth has been relatively slow. It is worth noting that the Federal Open Market Committee has scaled back its views on economic growth and inflationary trends. In response, interest rates are not likely to increase in the foreseeable future and actually may be reduced. In any case, it appears that the ongoing trade war with China, coupled with tensions between the United States and Iran, will continue to impact the world economy and the U.S. stock market.