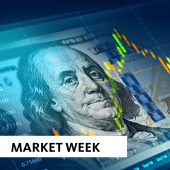 Equities began the week edging higher following the Federal Reserve’s announcement that it would buy corporate bonds under an emergency lending program. The Russell 2000 closed up 2.3%, the Nasdaq gained 1.4%, while the S&P 500 and the Dow eked out gains of less than 1.0%, respectively. After last week’s tailspin, crude oil prices rebounded while the yield on 10-year Treasuries advanced slightly. Investors remain weary, however, as more than 20 states are seeing an uptick in reported cases of COVID-19, and new hotspots in Beijing and India are raising concerns of a resurgence of the pandemic.

Following an impressive retail sales report, stocks jumped higher last Tuesday. Led by the Global Dow (2.45%), each of the benchmark indexes listed here posted gains of at least 1.75% (Nasdaq). Also climbing were crude oil prices (2.24%), gold (0.47%), and the yield on 10-year Treasuries (7.69%). Most sectors advanced, with the best performers being energy, health care, and materials. Along with the robust retail sales report, the Trump administration announced that it is preparing a $1 trillion infrastructure proposal aimed at accelerating the economy.

The Nasdaq inched ahead on Wednesday, but that was the only benchmark to gain. The large caps of the Dow and S&P 500 fell 0.65% and 0.36%, respectively. The Russell 2000 sank 1.77%, and the Global Dow changed negligibly. The yield on 10-year Treasuries dropped 3.04% while crude oil prices decreased 1.75% to $37.71 per barrel. It appears increases in reported COVID-19 cases were enough to pull investors from stocks.

Stocks were mixed last Thursday as concerns over the escalating number of reported virus cases, coupled with another 1.5 million new claims for unemployment insurance, caused investor uneasiness. The Dow fell 0.15% while the S&P 500, the Nasdaq, and the Russell 2000 all posted marginal gains. Energy stocks helped buoy stocks following a pledge from major oil-producing countries to continue to limit output.

Friday closed what may be best described as a roller-coaster ride for stocks. The Dow fell 0.80%, the S&P 500 dropped 0.56%, the Russell 2000 lost 0.59%, and the Global Dow gave back 0.29%. Only the tech-heavy Nasdaq eked out a 0.03% gain. Earlier in the day, stocks rallied following reports out of China that it would comply with phase one of the trade deal by accelerating purchases of U.S.-exported farm goods. Nevertheless, record increases of COVID-19 reported cases in Florida and Arizona drew stocks back from earlier gains.

For the week, the ups and downs experienced by equities ended with the benchmark indexes closing ahead, led by the Nasdaq, followed by the Russell 2000, the S&P 500, the Global Dow, and the Dow. The yield on 10-year Treasuries closed the week where it began. Year to date, the Nasdaq is safely ahead of last year’s closing value, while the other benchmark indexes have yet to catch up to their respective 2019 year-end marks.

Several important economic reports are out this week. The final estimate for the first-quarter gross domestic product is released this week. It is not expected that much will change from the prior estimate, which had the economy slow at a rate of 5.0%. May home sales figures are also available this week. Existing home sales plunged in April, while new home sales were little changed. The durable goods orders report for May is also out this week. Orders fell more than 17.0% in April. May should show some improvement.