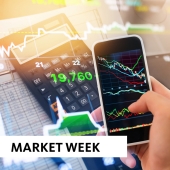 Stocks continued to rally at the beginning of last week amid hopes of enhanced testing for COVID-19. But by the end of the day Wednesday stocks slid, with the S&P 500 and Nasdaq posting their largest single-day declines since March 18. Energy shares in particular were hit hard. The Dow fell 4.4% and the small caps of the Russell 2000 continued to collapse, dropping over 7.0% on Wednesday. Economically, the virus is overwhelming the job market, as the number of unemployment insurance claims broke records for the second consecutive week.

For the past several weeks Thursdays have become rebound days for the market, and last Thursday was no exception. The Dow and the S&P 500 closed the day up about 2.25%, respectively, while the Nasdaq picked up about 1.75%. Oil prices pushed higher on word of output cuts. But COVID-19 has shrunk the demand for oil, which will likely keep prices in check even with reduced production.

A dismal jobs report (see below) drove stocks lower by the close of trading last Friday. Analysts believe as poor as this report may be, it doesn’t reflect the magnitude of the damage done by the virus. They point to the more than 10 million claims for unemployment insurance over the past two weeks as a further indicator that the worst is yet to come. As more information is released, investors will be able to assess the economic damage done by COVID-19.

After rallying to close the prior week with double-digit gains, investors reeled in those profits last week, pulling the benchmark indexes lower. The small caps of the Russell 2000 were hardest hit, falling more than 7.0%, followed by the Global Dow, the Dow, the S&P 500, and the Nasdaq, which was the only index not to fall at least 2.0%. The yield on the 10-year Treasury note fell to a three-week low as bond prices soared, also affected by the latest job figures.

For economic reports, the focus this week is on inflation. The latest price information is available for March with the Consumer Price Index and the Producer Price Index. Last month consumer prices inched ahead 0.1% and were up 2.3% over the last 12 months. Producers saw their prices drop by 0.6% in February and are looking for a strong rebound in March.