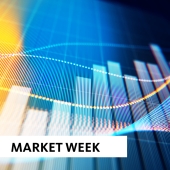 The week started with stock indexes falling sharply on the heels of an historic plunge of crude oil into negative territory. The Dow dropped nearly 600 points and more than 2.4% by Monday’s close. Minimal demand sent the prices for crude oil (CL=F) to -22.02 per barrel — down 222.06%.

Stocks continued to tumble on Tuesday as oil prices remained historically low. Each of the benchmarks listed here lost at least 2.3%, with the Nasdaq losing close to 3.5%. Concerns are increasing that the depressed demand for oil caused by the COVID-19 pandemic will continue well into the future. Also, the negative impact of the virus on the economy is being felt almost daily as more information is released.

The indexes recaptured some of the losses from earlier in the week on Wednesday. Some better-than-expected earnings reports, coupled with the Senate’s passage of a deal to add another $484 billion earmarked for the small business aid program, COVID-19 testing, and hospital support, provided positive news for investors.

Oil prices surged last Thursday and Congress voted for further aid to small businesses, helping to boost stocks, but only marginally. Unfortunately, test results of a drug that might offer treatment for COVID-19 may not be as promising as hoped, weakening stock returns.

A rally pushed the benchmark indexes listed here higher last Friday, but not enough to avoid closing in the red for the week. The president signed a fourth piece of COVID-19 funding legislation last Friday. The Paycheck Protection Program and Health Care Enhancement Act, a $484 billion bill, provides over $320 billion in new funding to replenish the Paycheck Protection Program, plus new funding for Economic Injury Disaster Loans, $75 billion for hospitals and community health centers, and $25 billion to enhance COVID-19 testing. Oil prices rose Friday but remain at historic lows. Of the indexes listed here, only the Russell 2000 closed the week ahead of its prior-week mark, but only barely. Both the Dow and Global Dow ended the week down by nearly 2.0%, while the S&P 500 fell over 1.25%. The tech stocks of the Nasdaq finished close to even, falling about 0.2% for the week.

The initial estimate of the first-quarter gross domestic product is released later this week. The fourth quarter saw the economy grow at an annualized rate of 2.1%. It will be interesting to note the impact, if any, COVID-19 has had on the overall economy. The Federal Open Market Committee also meets this week. More stimulus and responsive actions from the Committee are expected following this meeting.