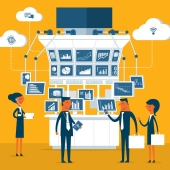 As April came to a close, each of the benchmark indexes listed here posted strong monthly returns. In fact, for several of the indexes, April brought to a close the best four-month stretch in many years. Both the Nasdaq and S&P 500 reached new highs during the month, as investors were encouraged by a shrinking trade deficit, favorable economic projections, low inflation, and stable interest rates. The Nasdaq led the way, nearing a monthly gain of almost 5.0%, followed by the large caps of the S&P 500, the small caps of the Russell 2000, the Global Dow, and the Dow, which gained over 2.5% for the month. During April, consumers saw gas prices climb as oil prices continued to soar.

The economy grew at a rate exceeding 3.0% in the first quarter, according to the initial estimate of the GDP. May’s GDP report will have more complete information and may show that growth wasn’t quite so robust, as consumer spending appears to be slowing. Nevertheless, the stock market could get a boost if exports continue to outpace imports and progress is made toward a trade resolution with China. Looking ahead, investors may see the Fed hike interest rates if the economy picks up steam.