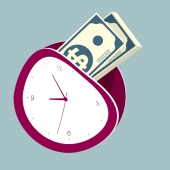 “Time famine” is the feeling of being overwhelmed by the demands of work and life. Also known as time scarcity and time stress, this pressure is a “critical factor” in the rising rates of obesity.

The more money you make, the more valuable you perceive your time to be — and the more time-strapped you may feel, according to University of British Columbia psychology professor Elizabeth Dunn.1 So wouldn’t it stand to reason that if you use some of your hard-earned money to buy yourself more time — for example, by paying someone to clean your house or mow your lawn — you might achieve a greater level of happiness? Indeed, that was the primary finding in a series of studies by Professor Dunn and other researchers published in the Proceedings of the National Academy of Sciences (PNAS).2

The study’s authors surveyed 6,000 individuals at diverse income levels in multiple countries, including the United States, Canada, the Netherlands, and Denmark. The surveys queried participants about whether they spent money on a monthly basis to hire others to take care of unpleasant or time-consuming daily tasks or chores — such as cleaning, yard work, cooking, and errand-running — and if so, how much they spent. Respondents were also asked to rate their “satisfaction with life” and report demographic information, such as their income level and whether they were married and had children.

Researchers found that across all national samples, 28.2% of respondents spent an average of about $148 per month to outsource disliked tasks, while in the United States, 50% of respondents spent an average of $80 to $99 on services that save time. Across all studies, those who spent money to outsource disliked tasks and/or save time had a stronger life satisfaction rating. Findings were consistent across income spectrums; in fact, in the United States, researchers found a stronger correlation among the less-affluent respondents. The authors noted, however, that their studies did not include enough people at the lowest end of the income spectrum to attribute similar findings to this group.

Of course, correlation does not necessarily indicate causality, so the researchers designed a follow-up experiment to further test their hypothesis.

In this experiment, researchers gave a group of 40 adults $80 each to spend over the course of two weekends. During the first weekend, they were to spend $40 on something that would save them time, such as ordering groceries online and having them delivered. On the second weekend, they were directed to spend $40 on a nice material purchase, such as clothes, board games, or a bottle of wine. On average, those who spent money to save time reported better moods at the end of the day than those who purchased material goods. And according to the researchers, over time, the effect of regular mood boosts can add up to greater overall satisfaction with life.

In a third study, researchers asked respondents how they would spend an extra $40. Just 2% indicated they would use the unexpected bonus to invest in time-saving services.

Perhaps most surprising of all the findings? Researchers polled 800 millionaires from the Netherlands about whether they spent money to save time. Despite the fact that these individuals could readily afford to hire others to take care of time-consuming tasks, only about half of them reported doing so on a monthly basis. Researchers surmise that the reason might be because such individuals feel guilty or don’t want to be perceived as lazy for outsourcing chores they can easily do themselves.

“If you have a lot of money and a lot of nice stuff, but you’re spending your time doing things that you dislike, then your minute-to-minute happiness and overall happiness is likely to be pretty low,” said Dunn in an interview about the research.3 In the PNAS report, the study’s authors contend that this may be especially true for women:

“Within many cultures, women may feel obligated to complete household tasks themselves, working a ‘second-shift’ at home, even when they can afford to pay someone to help. In recent decades, women have made gains, such as improved access to education, but their life satisfaction has declined; increasing uptake of time-saving services may provide a pathway toward reducing the harmful effects of women’s second shift.”

The bottom line? If you can afford it, don’t shy away from spending money to save time. Doing so is an investment that provides immeasurable returns in the form of overall well-being.

1“What Is Your Time Really Worth?” Elizabeth Dunn, TEDx Colorado Springs, December 1, 2014

3“A Psychology Expert Says Spending Your Money on This Can Boost Your Happiness,” CNBC, November 10, 2017.